What better way to kick off a few months of travel than by going to burning man? 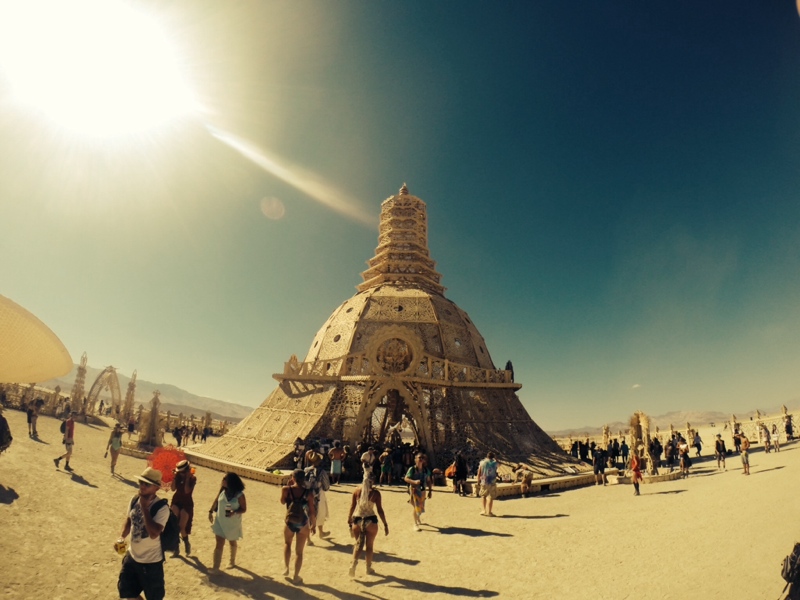 This meant months of planning remotely from Spain with high ambitions for what we could pull together in just a few days in San Francisco before driving several hours to this experimental and temporary city of art and madness.
During this time my father and I managed to build a hexayurt together: a great father-son project, and a wonderful little home for Léa and me. I recommend them. Here is what it looked like when we set it up in the desert:

Léa arrived in San Francisco, and soon after we packed up our truck to the brim with all kinds of nonsense…you know, decorated children’s bikes, rolls of carpet, creepy doll heads, pillows, costumes, LED lights, beer, the struts for a geodesic dome, gin, and an ample supply of canned chili…we started our journey. 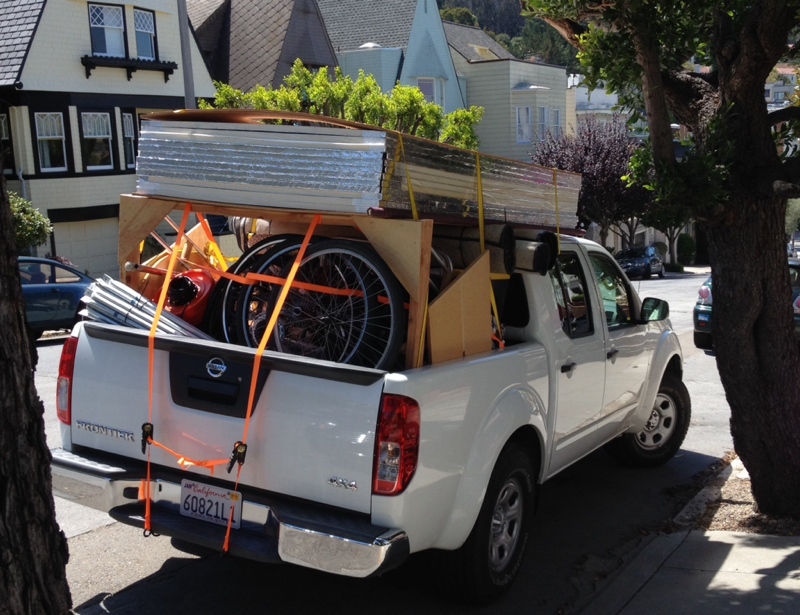 Our drive through the mountains into the night was peaceful and open. We had a beautiful sunset and a dark highway with trillions of stars above until, all of a sudden, we’re slowing to a stop, joining the tail end of a red neon snake that extends off into an infinite horizon. So. Many. Cars. The line to Burning Man starts all the way out here? We have like 50 miles left…
We turn off the engine and headlights, and accept our fate.
Half an hour later everyone hops in their cars, and we take off driving for two minutes and then stop. Again. And we repeat this for four or five hours until we’ve finally made it to the last section of dusty road leading to the gates of burning man…but everyone is stopped, with much ground left to cover.
It’s 2am and people are falling asleep in their cars while twelve lanes of traffic are all meant to be merging and advancing a few car lengths every hour. It’s pretty hopeless. 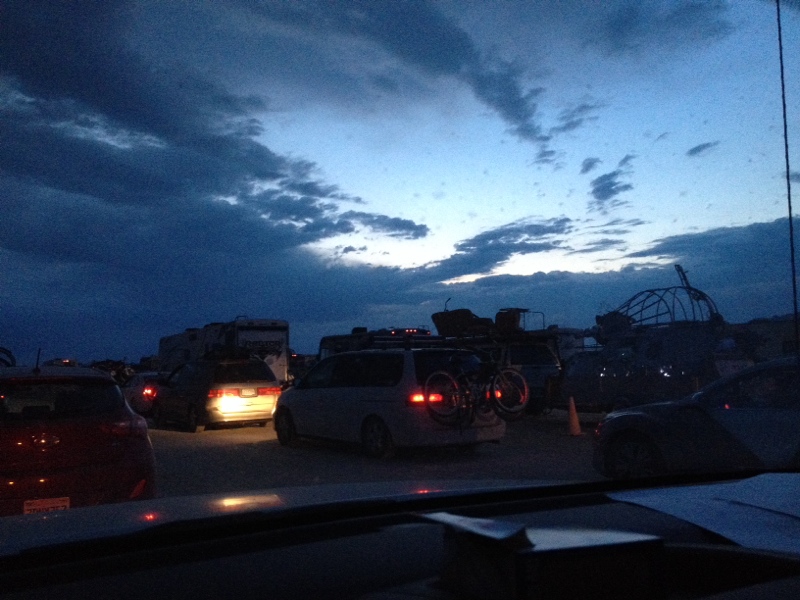 Eventually, the sun rises, and the day greets us with surges of thunder and lightning piercing through dark grey clouds that sail on across the flat, wide desert plain. People are startled, awake, but nobody moves an inch. We are stuck in the mud.

The radio tells us that due to the rain, the road will be closed for the entire day, perhaps even through tomorrow. Everyone stopped back on the highway is sent to nearby towns, and the lucky bunch of us on the gate road realize we’ll be spending our first day of burning man waiting in line. 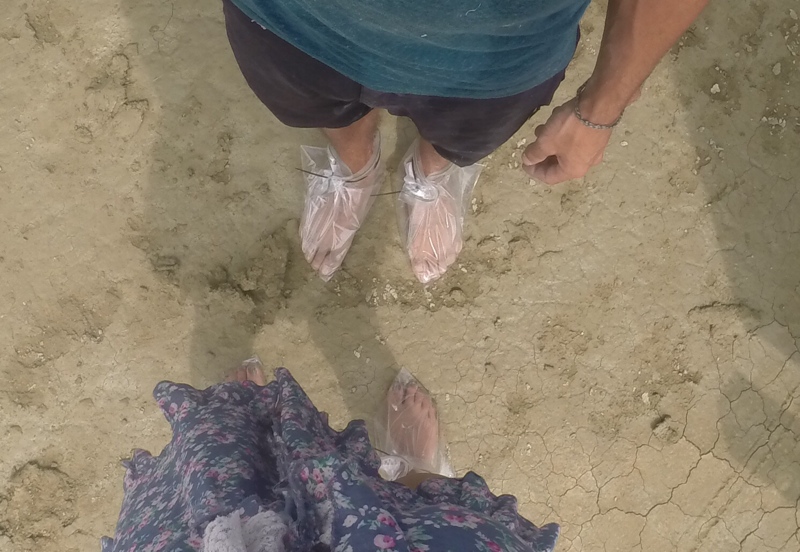 So we make shoes out of ziplock bags to make it to the outhouses without collecting giant, heavy clumps of desert clay on our feet!

It starts to hail grape-sized balls of ice as I’m stuck, unprotected waiting in line for the bathroom. No matter. The skies clear 10 minutes later, and we finally have sun on our faces.

We offer cocktails to our neighbors, play a bit of boule around the parked cars, enjoy some more drinks and snacks as the passing storms cast rainbows across the sky. Not so bad.

We pull in to our camp to find my long lost friend Ryan hunched over like an aging lumber jack, tossing firewood into a burn barrel, and we know we’re home. Other campmates start to filter in, each with their own harrowing story of the long and silly entry into this city of misfits. There are nine of us camping together, and we’re just getting started!

What can I say about the group of people we camped with – all gentle souls with a talent for heckling everyone who happened to be walking down the lane past our camp. Words of encouragement, discouragement, and heavy portions of nonsense. A great way to meet people – or at least not let them get away with simply passing us by, “Hey you! Stay at least fifty feet away from the artwork! Do NOT look that tiger in the eyes!” 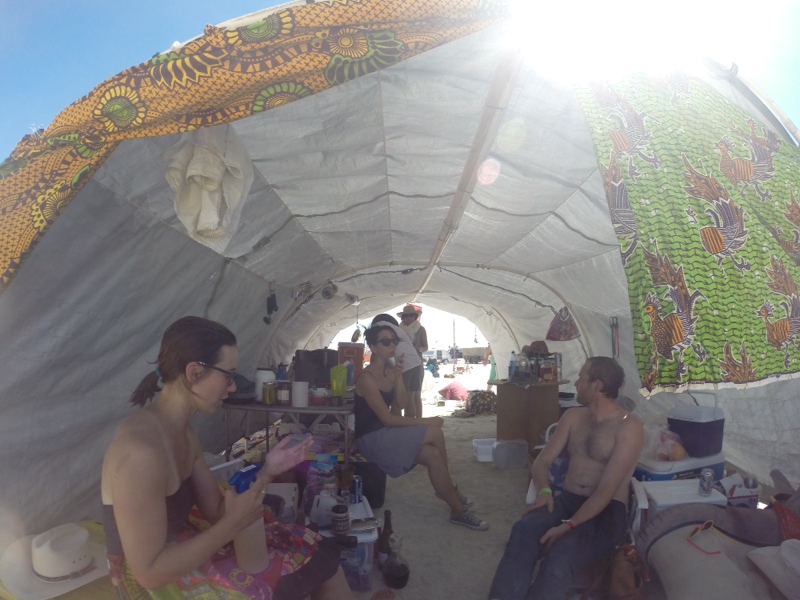 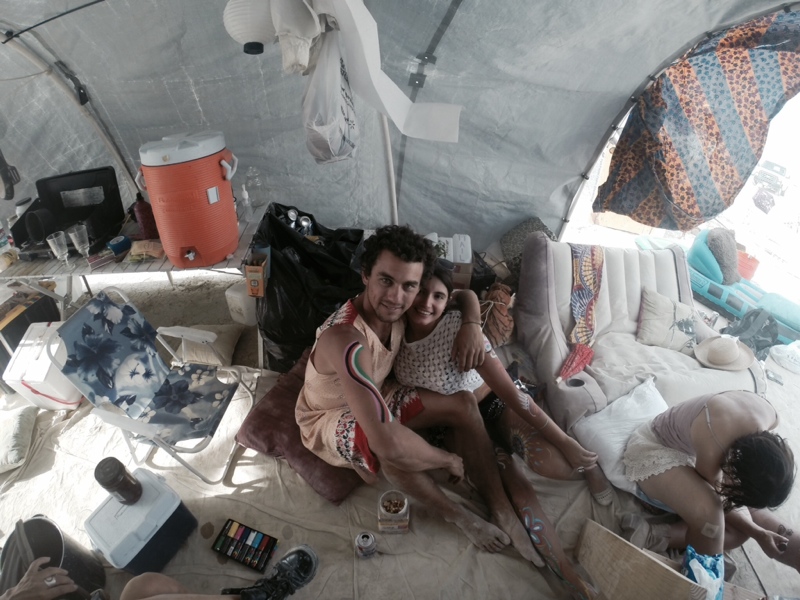 Let’s not try to summarize what it is like to walk around burning man either during the day or the night – let’s just say that we saw lots of sights and sounds that all bleed together in a blur of over-stimulation and wonder…and kindness, and familiarity. And dust. The scale of the art projects is unmatched with…um, with anything. Huge. Intricate. So much engineering and design and creativity. 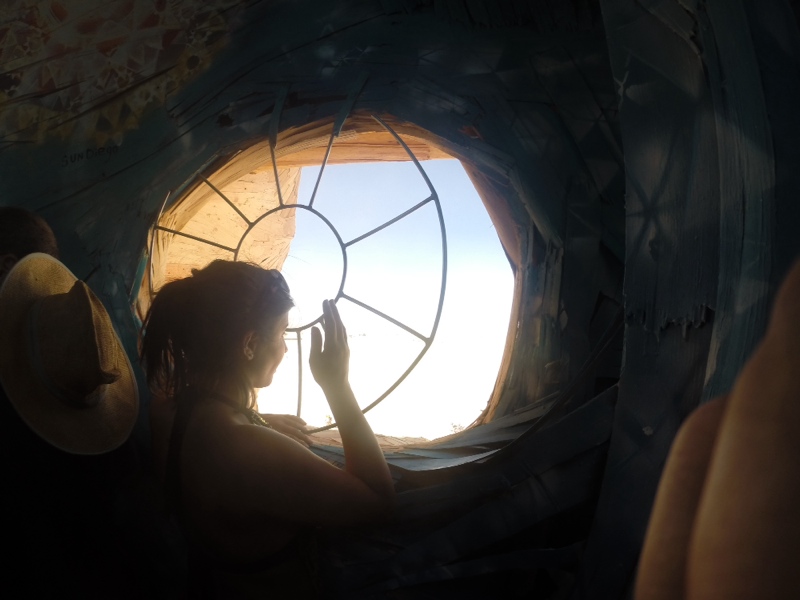 It’s a week-long festival, but in my opinion it’s better described as a city than an “event” considering the thousands of things that are happening simultaneously and the way you have to explore in order to stumble upon things to do. 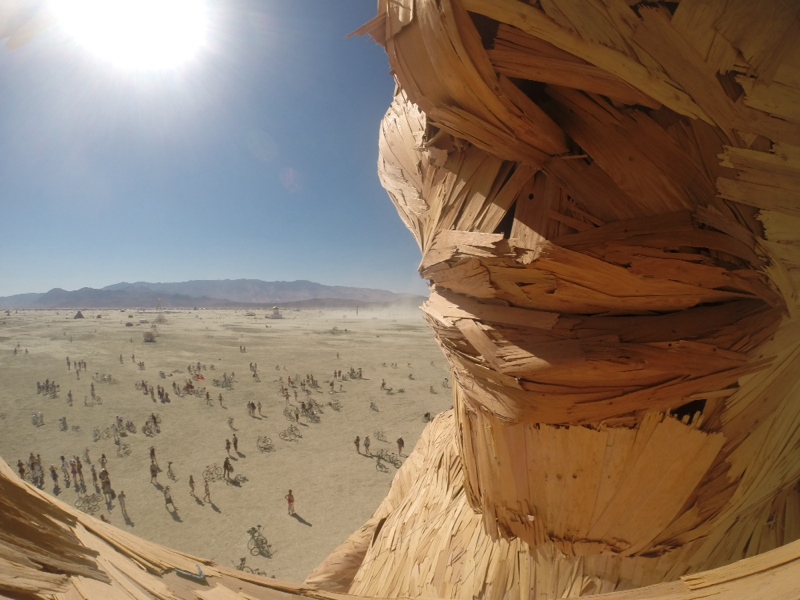 There are some things that become normal to you, like nudity, peeing in bottles, showering with baby wipes, long conversations with people you encounter, a sky full of stars, hydrating with beer, giant mind-blowing structures, comedic relics like the stuffed tiger shrine in front of our camp, and the sparkle pony skeletons we saw holding signs asking for shade and water. Art. Hugs. Nonsense. All become normal. Check out Barbie Death Camp:

A major highlight for us was born of our incessant desire to stop passers-by in any way we could. One of our camp members was out with a pressurized water mist sprayer offering to spray people to cool them down. This offer quickly evolved into “Free Taint Washes” which we promptly wrote on his belly, so that the offer was clear. After getting a few volunteers we realized this idea had momentum, and before we knew it we were chanting “25! 26! 27 taints washed!” as our numbers grew. He made it to 50 that day: the last volunteer was a not-so-shy girl named Thunder Pussy. It was the pinnacle of taint-washing in the history of the universe.

Oh, and also Grover Norquist (highly influential figure in the US who is anti-tax, on the board of the NRA…look him up) was apparently one of the people we offered to wash. You can read more about it here, as his encounter with us was actually published.

Needless to say, we feel like we’re famous now. So proud. How many conservative Republicans now know the word taint?

Other highlights include the burning of large structures like Embrace and the Temple. Also hanging out around our camp talking to and painting people, being able to sleep in late in the coolness of our hexayurt, and offering our homemade infused gin&tonics on the corner to the general public. Yummm. 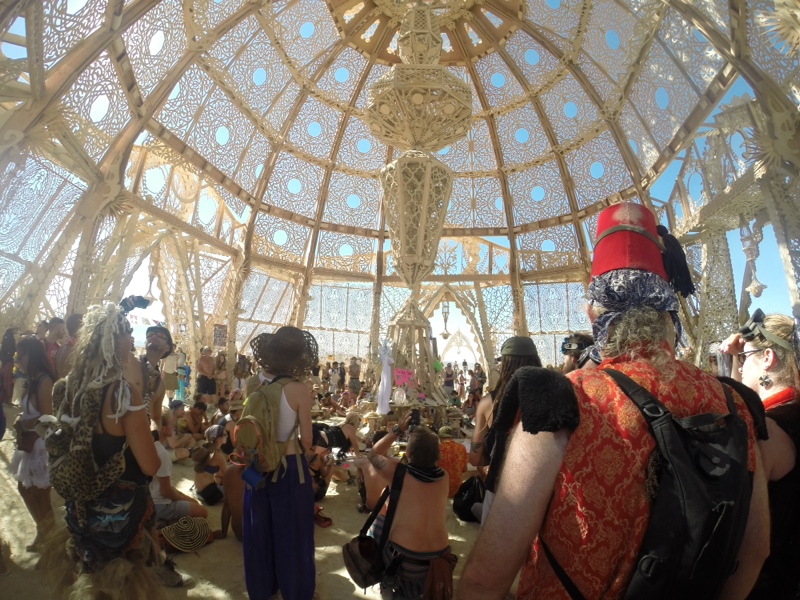 Eventually it was time to leave, and we were determined to have a smooth departure. We left at 4am, driving through the night on a two lane highway littered with cars, trucks and caravans passed out and pulled over on the side of the road, unable or unwilling to continue the exodus.

Just a few hours later the sun was rising on the pine-covered sierras as we made our way to Lake Tahoe for a hearty breakfast. A giant, deep blue body of water. A grassy patch for us to take a morning nap. And sweet, sweet wifi. Tired from our adventures, and ready for the next chapter.