The Olympian Family of Friends 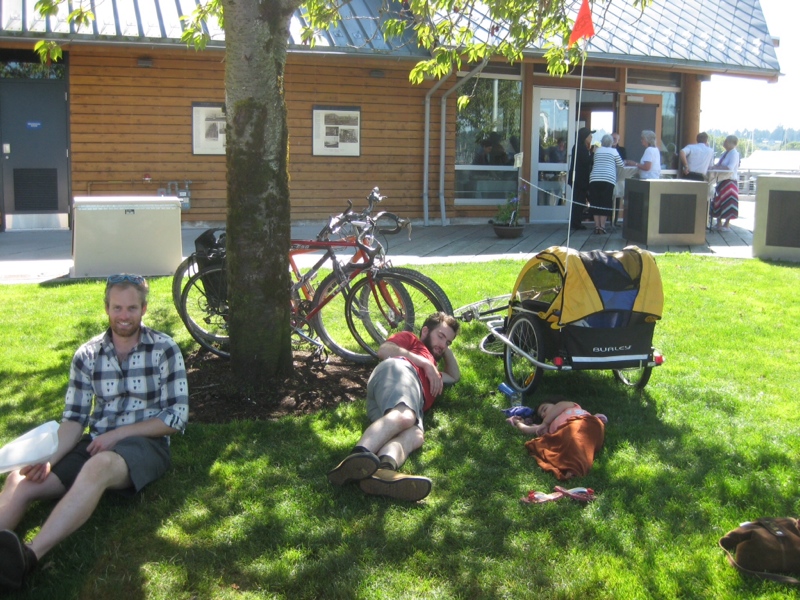 We land in the Seattle airport and wait for Ryan to pick us up to take us to his home in the nearby city of Olympia.

Ryan and I have been close for over 15 years now. In 2005 I hiked with him and another very good friend, Mark, for 101 days from Canada to Mexico along the Pacific Crest Trail. In fact, I introduced them on that hike, hoping they’d get along.

Now they live together in the same house on a plot of land where they’ve committed to a project of sustainability, living closer to the earth and enjoying the benefits of what I’d call a family of friends. When this was just an idea years ago we called it Living with Porpoise. Now I believe it’s become Oxen Holdings Limited. Which I think is more serious. They own land.

At the house you’ll find Mark, his wife Deepti (also a good friend of mine from college), their two-year-old daughter Maya, Ryan, his girlfriend Joanna, chickens, rabbits, a large collection of bikes, a garage full of all kinds of tools, a vegetable garden, and several creeks that converge in a heavily-forested ravine that stretches from their property and trickles into the nearby Puget Sound.

Waiting at the airport, I find myself expecting Ryan to roll up in his pickup truck, wearing a cowboy hat, chewing a piece of straw, eyes squinting with a confident and mischievious glare.

He pulls over in a small, practical sedan with a big smile on his face having spent a good portion of the day dealing with the genius bar of the Apple store.

We arrive at his house and, again, I am expecting to see something very old and weathered, caving in, disheveled…but we pull into the driveway of a beautiful home and smiling faces of the people that live there: each concentrating deeply on their respective projects, but very ready and happy to receive us as guests. 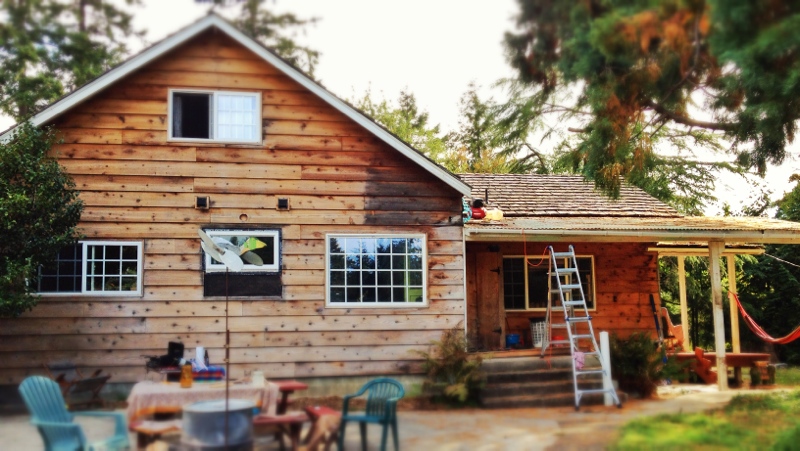 I guess it’s been a while since I’ve had an update on Living with Porpoise. It seems these Oxen folks really have their shit together! And look at their back yard: 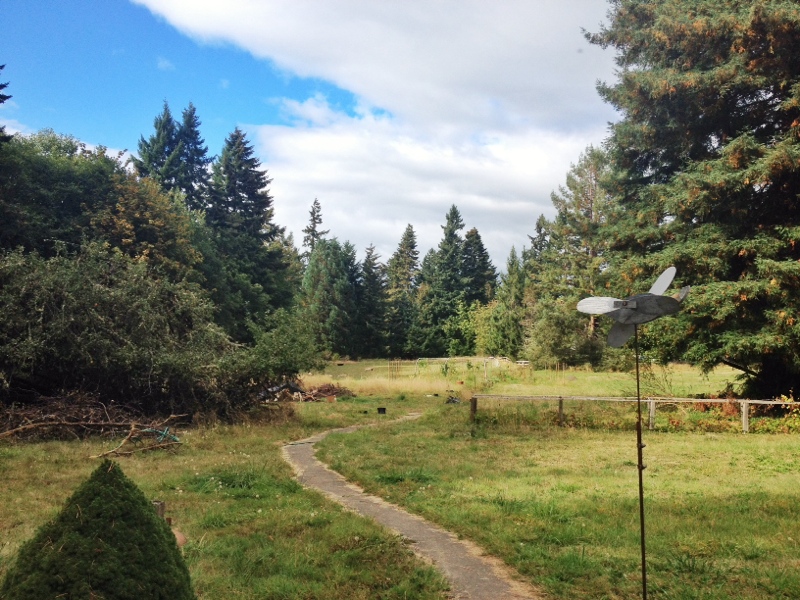 Suddenly out pops Maya, perhaps the most adorable creature on this planet. Last I saw her she was three weeks old: I remember her mother was at work, and her father was temporarily crippled from a recent Ultimate Frisbee accident which meant I had to improvise a baby-holding waltz of sorts to lull her to sleep when she started crying from her crib. I was terrified. She was so tiny. 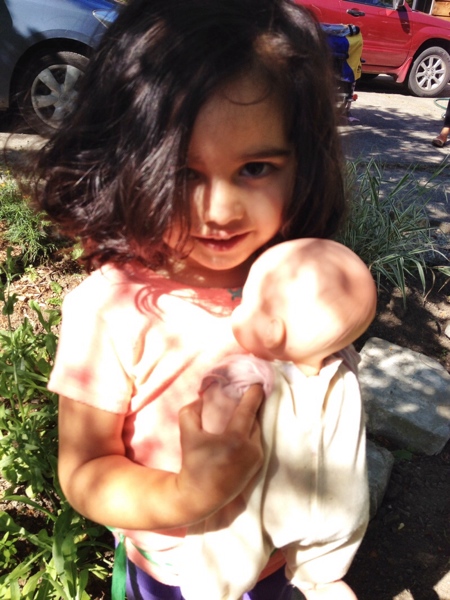 And now she’s two, in the blink of an eye, and running around like she owns the place. Extremely conversational, even if nobody is listening. She has the peculiar habit of referring to herself in third-person, using an abbreviation of her middle name: she calls herself Jahni. She knows a seemingly endless number of versus to the Wheels on the Bus song. The flowers on the bus, I learned, say “I’m so pretty! I’m so pretty! I’m so pretty!” When she recognizes the smiles of those around, she’ll often blurt out “It’s so FUNNY!” and when the thorn of a blackberry bush catches her arm, she calmly unhooks herself and reflects to herself out loud in a tone of acceptance, “It happens.” 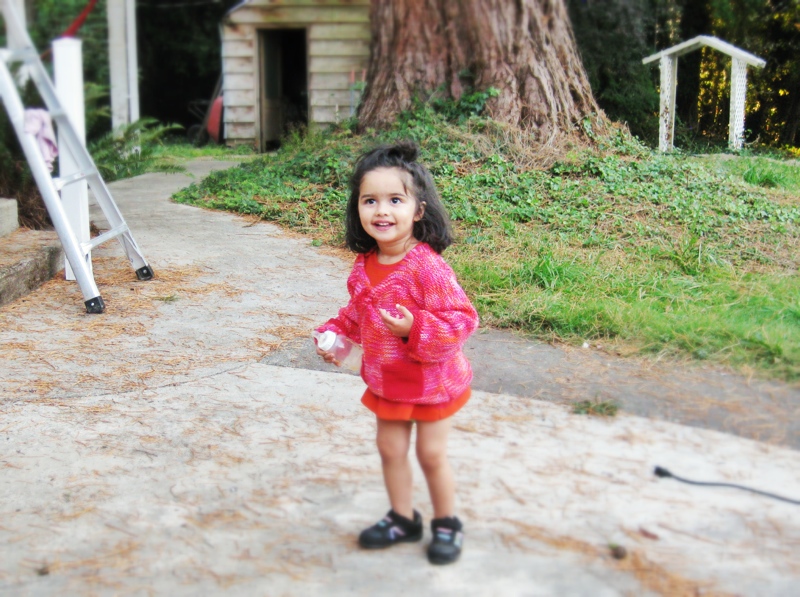 In the evening we walked down to the shore of the sound to watch the sunset, skip rocks, show a giant dead fish to Maya, and then had a wonderful family dinner of grilled salmon outside the house.

During the night we had a campfire, catching up and recounting all sorts of stories while drinking fine beers. Eventually we move on to bourbon, and I’m amused by my friends’ desire to smoke cigarettes – something they never do. Ryan rolls himself one with no filter, and Mark is almost burning his face off trying to light it in his mouth with the campfire. Goons. 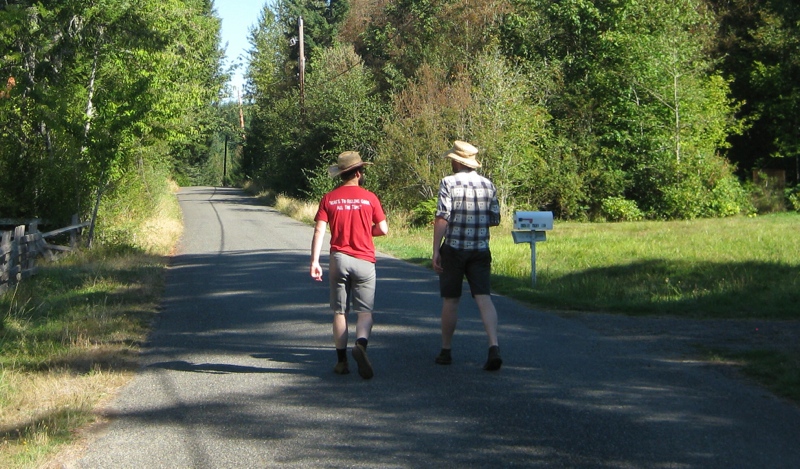 We sing TLC’s smash hit Waterfalls to the ukulele, followed by dub-step remixes to children’s songs, followed by spilling large pieces of burning wood from the fire onto unsuspecting innocent bystanders, twice.

In the morning we’re presented with a giant spread of pastries. Léa and I notice how everyone really knows their role in helping out in the house, as dishes and food and glasses and drinks are presented, filled, washed, put away without a word being exchanged between them. It’s like this all day. They’ve got a rhythm. 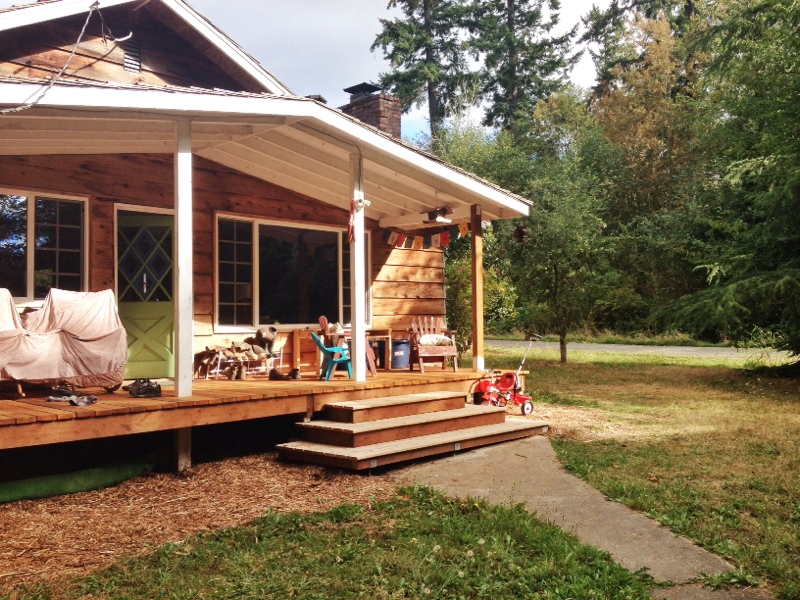 Later that day we all take off on bikes (the house has MANY) with Maya in tow to visit the farmer’s market, tasting the local fish and chips and crab cake burger while a presumably local folk singer is on a small stage, competing with our rising voices.

Later Maya naps under the trees and we check out the fish market.

We head home again on bikes, to discover it’s time to move the neighbor’s sheep. 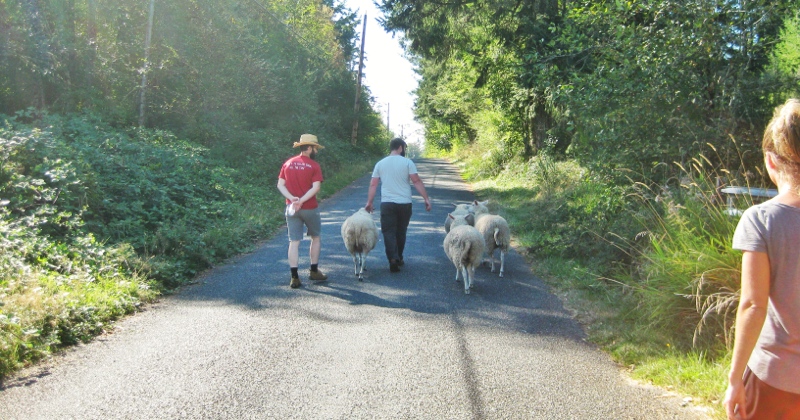 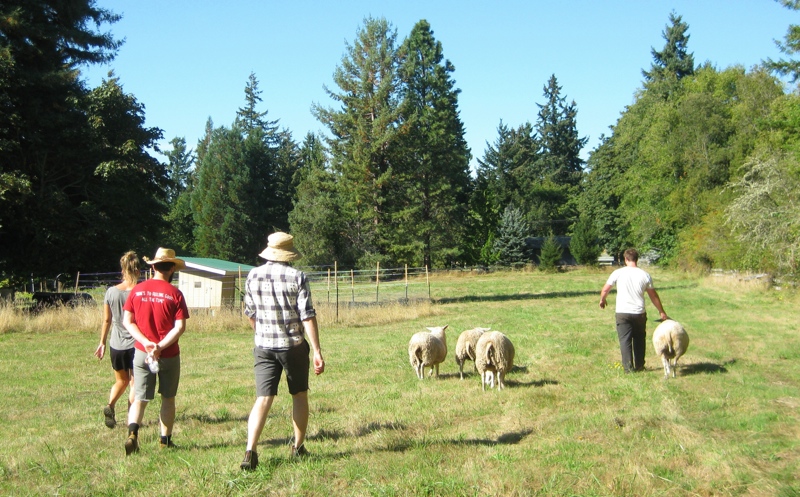 Maya finally willing to put on the sweater that Léa knit for her. 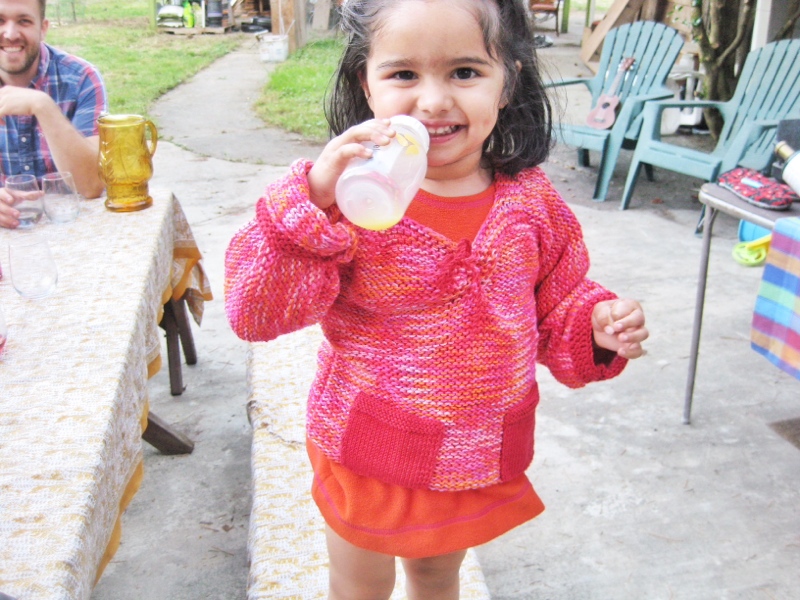 We have another wonderful coastal sunset and family dinner – an amazing spread of indian dishes. 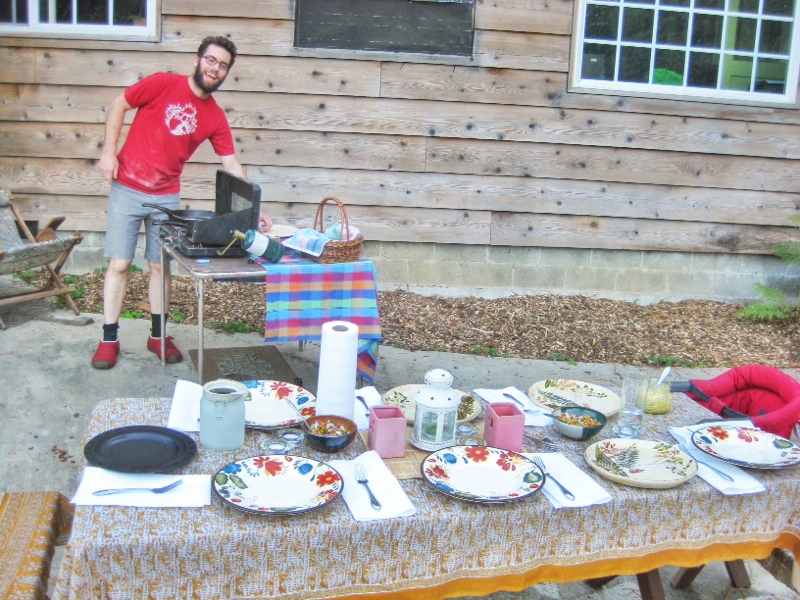 The next morning we’re up early for a last breakfast with Ryan, then a quick hike with Joanna and Maya. After walking through the woods, we take Maya to the port to see all sorts of things like crabs, starfish, jellyfish, herons, and Maya’s most memorable: a “farting boat” (a scuba diver sending bubbles up beneath its hull).

We leave Olympia with a warm feeling, and grateful for being able to participate in that big family, even if just for two days.